COP 23 – Oceans Tell Us It Is Not Enough

COP 23 – Oceans Tell Us It Is Not Enough

With the conclusion of the Fiji-Bonn COP 23 and its multitude of meetings, events and negotiations, it is timely to question if the world is in a better position to tackle climate change repercussions disrupting our current realities and threating our future. With negotiators only able to advance the agenda as far as their political leaders mandate, complicated by the regressive positions of one of the world’s biggest polluters, it could be surmised that the global state of climate affairs is at an impasse or at best only marginally improved.

As the important work program of the Paris Agreement moves incrementally forward it is juxtaposed to the USA advocacy for clean coal and the Green Climate Fund’s arduous accreditation process that thwarts financing access to many deserving countries. The fanfare of the Fiji-Bonn COP stands in contrast to the hard felt climate impacts in Houston, Barbuda and Puerto Rico among many other communities where services and infrastructure suffered from lack of preparedness, business as usual practices and societal apathy of what can be done. Yet, praiseworthy are such outcomes, including the Bonn Communique and related pledges by countries to the Climate and Clean Air Coalition (CCAC) to combat exacerbating air pollution and public health risks in the face of declining development funding by World Bank for pollution mitigation.

The European Investment Bank (EIB) $24m commitment to support the Caribbean post-disaster reconstruction is catalytic financing to accelerate the vital pathway towards climate resiliency in this increasingly risk prone region. And the significant contribution of non-state actors was further crystalized in the Bonn-Fiji Commitment reinforcing numerous initiatives that empower cities and regions to undertake climate action through sustainable urban planning, financing climate resilient infrastructure, knowledge sharing and linkages to advance political leadership and contribute to the Sustainable Development (SDG) and NDC Partnerships goals.

Yet, the COP’s greatest contribution may be the launch of the Ocean Pathway Initiative as it highlights the critical role oceans play in human development, global weather patterns, and climate regulation. The oceans which cover 71% of the earth surface are instrumental in absorbing 94% of Earth’s trapped solar radiation which otherwise would result in greater thermal stress on land. But oceans themselves are also already suffering from anthropogenic heat impacts creating a fragility that is jeopardizing and destroying the very resources and ecosystems essential for human development. Ocean acidification, warming, oxygenation, and sea level rise are indicative signs of advancing climate change with direct impact on economic livelihoods, coastal vulnerability, and population agglomerations. The pandemic disastrous trend of coral bleaching, spectacularly captured in the documentary “Chasing Coral”, illustrates the widespread (>60%) destruction of the Great Barrier Reef, the world largest living ecosystem. Rising ocean temperatures attributed to anthropogenic heat emissions have triggered three massive and unprecedented episodes of coral bleaching, each with increasing severity in 1998, 2010 and 2016, whereby the thermal stress disrupted the symbiotic relationship of the coral host and its algal symbionts or living residents, resulting in an eerie whiteness and precursor of mortality across the reef. This blatant impact of increasing global GHG emissions on the enormity of the ocean body is a clear early warning of threatened human survival. Healthy oceans are imperative to continue their valuable ecosystem functions, including carbon sequestration as well as food provider, natural coastal protector and driver of economic livelihoods and tourism. The urgency for protecting the oceans cannot be overstated as the timing to resuscitate bleached corals even in areas with sustainable reef management is limited on account of transversal ocean dynamics sensitive to severe ocean warming that can only be corrected by reducing global anthropogenic emissions.

“When Rising Seas Hit Home”, a 2017 report by the Union of Concerned Scientists, captures analytically and graphically the impending threats of oceans and chronic inundation on local communities. The findings reflect the current and future scenarios of sea level rise across U.S. coastal areas and its harsh implications if preventive measures as not undertaken immediately. As carbon emissions increase ocean temperatures, moderate sea level rise will impact 170 communities by 2035 with chronic inundation, defined as occurring 26 times per year and covering at least 10% of a county subdivision usable land area, including many socioeconomic vulnerable areas of Louisiana and Maryland.

By 2060, this number rises to 270 coastal communities and by the end of the century 40% of all East and Gulf oceanfront communities will be chronically flooded. More aggressive sea level rise, dependent upon the continued path of carbon emissions, will affect high population centers such as Oakland, St. Petersburg, New York City jeopardizing economic assets, local infrastructure and disrupting ways of life. 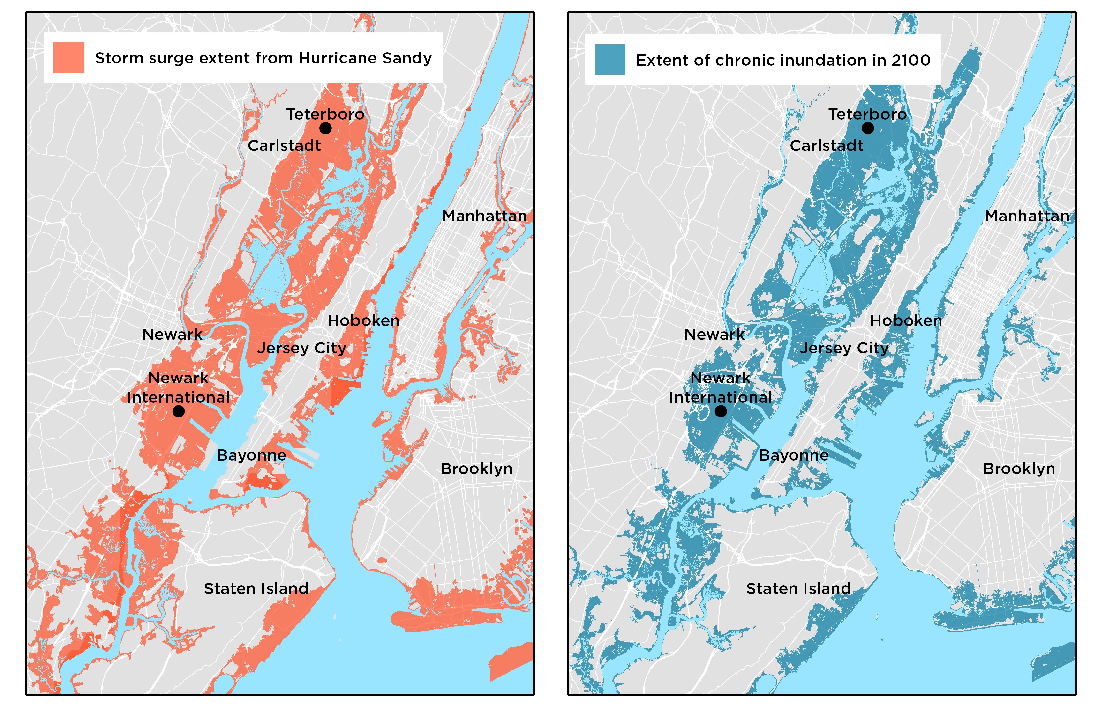 “If emissions continue to rise through the end of the century, sea level is projected to rise more than 6 feet by 2100. In this scenario, the same areas of northern New Jersey and New York City that were flooded by Hurricane Sandy’s storm surge would be inundated more than 26 times or more per year, or every other week on average.” Union of Concerned Scientists (2017): When Rising Seas Hit Home

Climate mitigation and adaptation actions are imperative both to curb carbon emissions and retrofit communities and rethink policies to minimize the imminent damages of which territorial retreat from certain areas may be the only course of action.

As the politicians and negotiators return to their capitals and plan for the next COP, civil society, city networks, researchers, private sector continue to mobilize and advocate for climate solutions at the sub-national level, particularly in the USA to fill the vacuum of the misguided national leadership. Locally and individually driven, people-based solutions are all the more critical in our present time to complement the macro level international climate processes and optimize the collective impact of population groups to reduce emission trajectories. People-based solutions can also promote informed political leadership through electoral support of candidates that prioritize environmental and quality of life issues. Clean air, drinkable water and healthy and secure communities can and should resonate with all citizenry as they look to their own backyards and consider the impact of their behaviors on local and global ecosystems. GHG emissions can be addressed at the sub-national and local levels through better management of territorial and consumption footprints at the city and household level. Prioritization of low-carbon energy systems and multi-modal transportation infrastructure coupled with demand management of consumption and waste trajectories by individuals, firms and municipalities can contribute significantly to meeting national emission targets, while mainstreaming the use of nature-based solutions such as wetlands to support climate resiliency and mitigate worst case climate scenarios.

The whole family came out for a swim this morning.

She was wearing a white cape today #chicago #chica